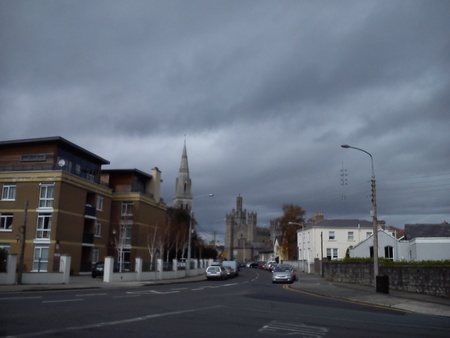 Carrickbrennan is an old name for the Monkstown area. 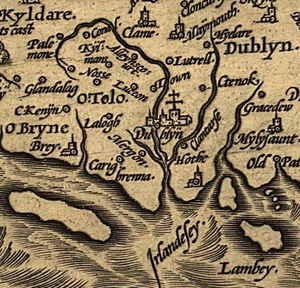 Carig Brenna (Carrickbrennan) is shown on one of the earliest maps of Ireland - the 1573 map by Abraham Ortelius (April 2, 1527 – June 28, 1598) (Extract Left).  An extract from his 1584 edition clearly shows Dublyn (Dublin), and below it, Carig Brenna, between Mergon (Merrion) and Brey (Bray).  Most of the locations named are the locations of major monastries such as Glendalough, Maynooth, Clane, Lucan and others, and clearly indicates that Carig Brenna is an important site at the time.  Note that many early maps of Ireland are printed with west at the top of the page, so you must turn it through 90 degrees to relate it to a modern map.

The southern half of Carrickbrennan Road (Richmond Hill to Monkstown Castle)  was a tree-lined avenue with entrances to landed estates and large houses on own grounds until the middle of the 20th century.  These houses included Greenbank, Yapton, and Monkstown Park.  The houses at Carrickbrennan Lawn were constructed in the 1970s.

The Northern half of Carrickbrennan Road was dominated by religious edifices (Church of Ireland (1789 with many modifications), Roman Catholic (1866) and Quaker(1832)) and included residential and commercial buildings

Carrickbrennan Graveyard is said to be the site of a 6th century monastrery. The building fell to ruin and was replaced in 1668 by a church built by Edward Corker. Today this church lies in ruins, but in the 19th century the building was modified somewhat for a watchman's house to deter body snatchers.