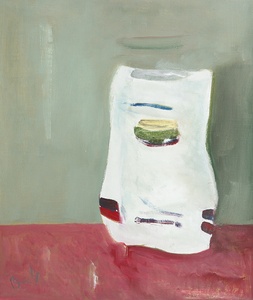 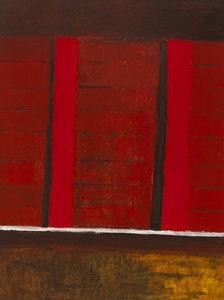 Charles Brady was born in New York in 1926. He took night classes in drawing before entering the Art Students League of New York in 1948 to complete a year long course. After art school he continued to paint, beginning to exhibit in the early 1950s and at the same time working to support himself, mostly in menial hotel jobs, but also for a while as guard at the Metropolitan Museum of Art.

Brady had his first solo exhibition in the Urban Gallery in 1955. In 1956 he travelled to Ireland and began painting the Irish countryside. He returned to New York in 1958 but in 1959 he moved back to Ireland and settled there for good, first in Dublin and then Dun Laoghaire.

Poverty forced him to paint on small pieces of cardboard and small pictures became typical. He is widely recognised as, a painter of insignificant, even banal objects, which he treated with monumental grandeur and dignity, combining a spare, almost minimal aesthetic with an open, painterly approach. Everyday objects such as an open matchbox, a bus ticket or an eyedrop box, float in a distorted perspective. These small, modest, compositions allowed him to refine a spare almost mystical style.
Charles Brady’s works are included in numerous public collections including the Irish museum of Modern Art and the National Gallery, Ireland.