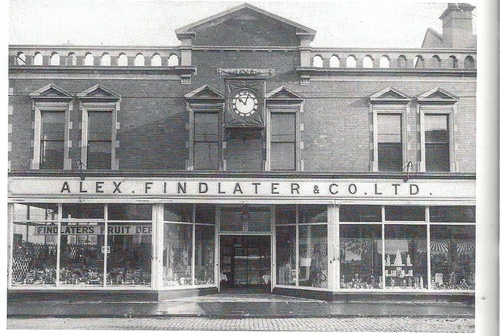 Convent Road was created and named in the early 1900s.  The St Mary's Dominican Convent had been established in the area over 50 years earlier.  Convent Road was originally called Paradise Avenue (Ordnance Survey map 1850), and later Paradise Row.  Convent Lane is a lane leading from Convent Road through to the Bloomfield Shopping Centre.

History of the road 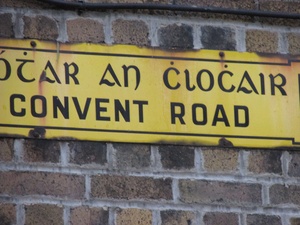 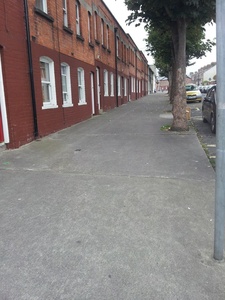 Many of the worst housing areas ("the courts") were in Paradise Row in the 19th century.  Among these courts were Bryan's Court and Milliken's Court.  The 1901 census shows 37 people in Bryan's court and 52 in Milliken's court, mostly in one-room accomodation.  Further details here

The red-brick houses on Convent Road were constructed about 1905 as part of a major scheme to improve the accomodation of working people.

The Dominican Convent was established about 1847 when the Dominican nuns were invited by the local Parish Priest, Rev. Bartholomew Sheridan to open a convent and school in the area.  The convent was established in the house and grounds of Echo Lodge, a large house with surrounding land.  Echo Lodge was previously the property of a prodestant clergyman, Mr Noble-Dalton.  There is a more detailed history here  The main convent building, including Echo Lodge was demolished to create the site for Bloomfield Shopping Centre

Shops on this street