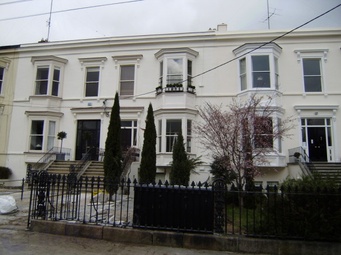 On the 1850 maps, Crosthwaite Park is shown as greenfield, but is substantially developed as far a Number 32 on the 1870 maps.  Numbers 1-32 are the houses on both sides of the actual green area, with the even numbers on the East side, and the odd numbers on the West side.

The remaining houses date from the mid 20th century.

John Crosthwaite(1794-1884) the developer of Crosthwaite Park was a chairman of Kingstown Town Commissioners, and lived at Crosthwaite Hall, Lower Glenageary Road for some time.  Among other things, he built the Royal Victorian Baths at Queens Road.  These baths were demolished in the early years of the 20th century to facilitate the widening of the road.  He was also responsible for the development of sea baths at Salthill, now long gone.  He laid the foundation stone for the Courthouse and Town Hall, designed by John Loftus Robinson.