Haddington Terrace is a mainly residential cul-de-sac at the seaward end of Adelaide Terrace, overlooking the East Pier of the harbour.  The east end of the Terrace is entirely occupied by the Kingston Hotel, including bar and restaurant.

The buildings are all on the landward side of the terrace - there are gardens on the seaward side.

Haddington Terrace is not mentioned in the 1835 directories, but appears in the Griffiths Valuation (Extract above)  of the 1850s as a terrace of 12 houses.

The high valuations attributed to these is indicative of high-quality 3-storey terraced houses.  Thomas Tilly, the Leaseholder lived at Henrietta Street Dublin.

Houses number 9,10, 11, and 12 are now occupied by the Kingston Hotel.  House number 12 was placed at the end of the cul-de-sac and the front of this house faced the terrace, while the side of the house faced seaward on the adjacent Victoria Terrace.  It appears that Lady Blayney owned the gardens accross the road, leading down to the railway.

Lady Blayney is believed to have been the wife of the 11th Lord Blayney, the family which owned much of Castleblayney.  He died 1834 following a distinguished military career.

Following is the genealogy of Lady Blayney 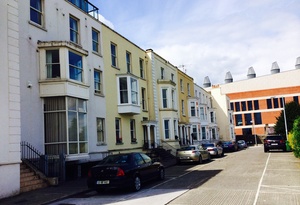 Present day view, with side of new Library