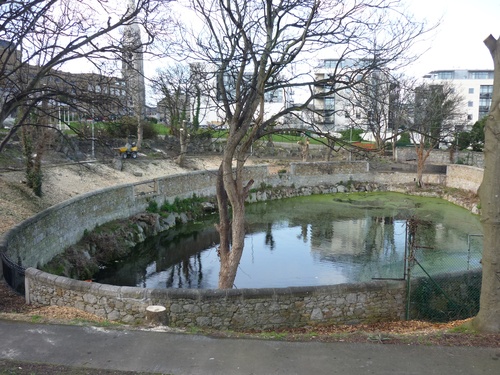 Haigh Terrace is a cul-de-sac of 6 early Victorian houses and runs northward from Upper George's Street almost opposite McDonald's restaurant.

Houses number 1 & 2, which are separated from the others by a lane, are shown in Griffiths valuation as owned by James Haigh, but are shown with low value.  Of these, Number 2 was his office.  The low value probably means that they were not complete at that time.  James Haigh also owned number 3 which was shown as full value.  This probably means that it was completed but not yet sold.  James Haigh (1797-1878 had many irons in the fire, being an engineer, and millwright.  He is also shown as the lessor of a number of houses at Mount Haigh, just around the corner in Upr George's St.

On the west side of the end of Haigh Terrace there was, until recently, a stagnant "pond".  This was formerly a reservoir for storing fresh water for ships

Beyond the end of the Terrace, until recently, there was a spectacular bronze statue of Christ The King, by Andrew O'Connor