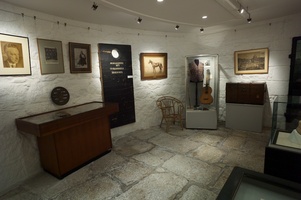 Joyce's Tower, Sandycove is a wonderful example of an early 19th Century Martello Tower built to defend Dublin against a threatened and imminent French invasion. It is also, of course, the location of the opening chapter of James Joyce's masterpiece-"Ulysses".

The museum houses a unique collection of artefacts, documents and books relating to the life of James Joyce and in particular, to his most famous novel.

It attracts visits from all over the world-in 2013 over 35,000 people visited the Tower.

James Joyce was invited to stay in the Tower by his friend Oliver St.John Gogarty. He arrived on 9 September 1904 and stayed only six days.

Martello Towers were erected during the period 1801 to 1804 and each took about six months to build. The average cost was £1800 per tower and many, such as Sandycove, were attached to a battery or fort.

The main function of the Martello Tower and battery was to resist a naval attack by means of large swivelling guns and a total of 35 artillery men were stationed here in its heyday.

During the Second World War an anti-aircraft gun and a searchlight were installed at the Sandycove battery, and the gun was used once towards the end of the war.