Mills Street is a small cul-de-sac and is not  named on the map (right), but the position is shown in orange

Mills St dates from the early 1900s, and was part of the housing initiative to clear out some of the areas of poverty in Kingstown/Dun Laoghaire. Much of the poverty was in the "Courts" which were in fact the backyards of big houses. At the end of where Mills St now stands was Hassards Court, which has now become part of the east end of Domnick St (The houses beyond the wall in this picture). This court was attached to Echo House, which later became part of the Dominican Convent. Hassards Court is shown in the in the 1901 census as Echo Court, but Domnick St is in the 1911 census. 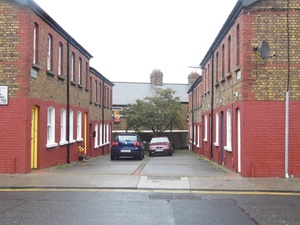 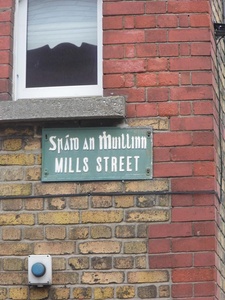