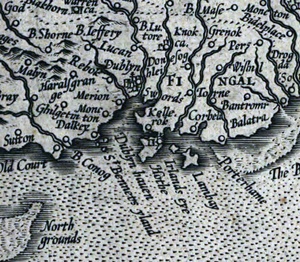 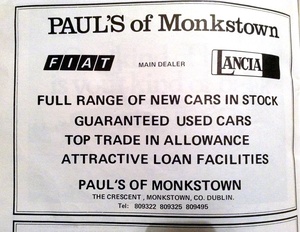 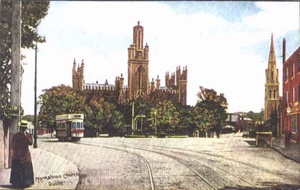 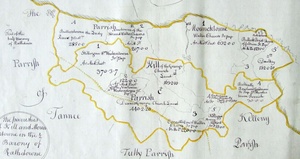 Monkstown village (as "Monston") is shown on maps almost since the development of maps.  This one (left) called "Irlandiæ regnum" dates from 1606 or thereabouts, and was produced by the Mercator company.

In the 16th, 17th and 18th century, Monkstown included an area from Blackrock through Dun Laoghaire and Glasthule, and is so shown on the maps associated with the Down Survey of the 1680s (left below).

In the Griffith's valuation in the mid 1800s, Kingstown (Dun Laoghaire) is found within the parish of Monkstown.

The dominant buildings in Monkstown are the Church of Ireland (St Mary's) and the Catholic Church (St Patrick's).  Both can be seen clearly in this postcard (right) dated 1905. Electric trams were introduced in 1896 to replace earlier horse trams.  On the postcard (right) the tram can be seen, but no wires are visible.  The power was NOT taken from the tracks or from any other source - the reality is that the photographer considered that wires spoiled an otherwise good photo, so he removed them using the Edwardian equivalent of Photoshop.

Little of the original 1789 Church of Ireland remains visible within the present structure, but some remnants of the walls can be found inside.  The current exterior was designed by John Semple and was completed about 1830.  In 1868, a major extension was constructed at the back to form a new chancel, and was very well matched with the Semple style, so that most people would not notice the join.  The extension was designed by McCurdy.

Construction of the Catholic church commenced in 1861 with a gothic design by P. Byrne.  Following the death of the sponsoring priest (Bartholomew Sheridan, PP, Kingstown) in 1862, the partly-built church was demolished, and construction commenced in 1863 with a design by Pugin and Ashlin.  The church was opened in 1866, although unfinished.  The spire was constructed about 20 years later. 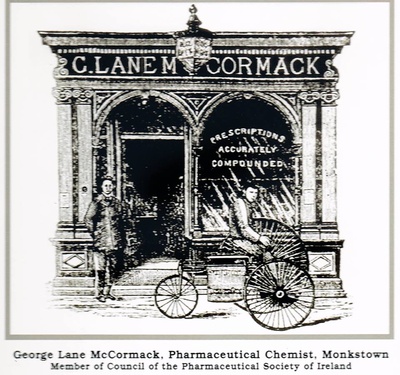 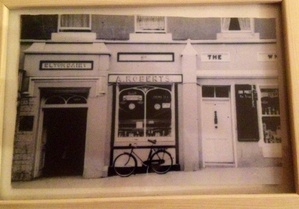 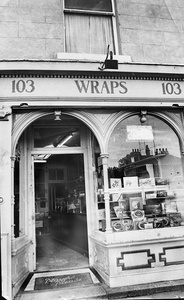 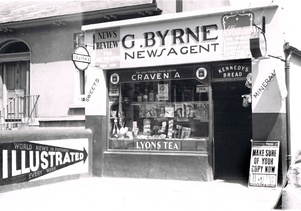 The Postman and the Floristry in Monkstown

The Postman and The Floristry of Monkstown.   Click here for video

This video, taken about 2010 shows Monkstown in an untypical snow, and a determined postman, determined that his letters should be delivered regardless of the weather.

Growing Up in Monkstown... by Julie Conlon

(This essay was written by Julie Conlon in the early 1990s)

I was born in 1975 and have lived in Monkstown all my life, first in Brook Court and then in Carrickbrennan Lawn, where we reside today. So, what has this meant to me? What has it been like growing up in Monkstown?

A difficult question. Having only lived here, I have nothing by way of comparison to offer. Monkstown is all I know. However, if I were to choose one aspect of my surroundings which best illustrates my childhood in Monkstown, it would have to be (not unsurprisingly) the local sweetshop. Here is a place so richly represented in my memory, I can see and smell it to this day, despite the fact that it no longer exists. "Tyndalls", as it was called, having undergone several different guises, is now a florists, called "Greenes". It was located next door to the chemists, "Lane McCormacks", with its oversized coloured bottles. You know, I think it only sold sweets and nothing more, not even papers...

The name, "Tyndalls" was written in black on a rather gaudy yellow background. The whole shopfront was yellow and consisted of a narrow door with a window to the right. The shop itself was quite dark and long, but with very little floor space for the customer. Indeed, any more than about four people in the shop at the one time, made it seem crowded. I remember that the shelves of sweets were at eye level, but considering I was about five years old (and a short five-year old at that!), this estimation may be inaccurate. A kind of plexi-glass panel prevented you from touching the sweets, an addition rarely seen today. At the top of these panels were little wooden saucers, at intervals along the length of the shop, where your change was left, or where you left the money, yourself.

Onto the important part, the sweets themselves... While there obviously were Kitkats, Mars bars and the rest, available in "Tyndalls", they are not what I remember. What stand out clearly, were the big plastic jars of boiled sweets that lined the side wall of the shop, behind the counter. There were apple drops, (which looked like marbles), bulls' eyes, Tom Thumb drops and numerous others, the names of which, unfortunately escape me. You asked for a quarter pound of whatever sweet you wanted and the old lady would weigh out the desired amount in her weighing scales and then slide them into a little paper bag (before leaving them for you on the aforementioned little wooden saucers). God, they were lovely. And they'd last you for absolutely ages, and I mean ages. Days later you could find a forgotten bag of now very sticky apple drops in the pocket of your anorack. All the brown paper would now be stuck to the sweets, but you could lick it off and they'd taste extra nice because they were so unexpected. I once had the unfortunate experience of getting about six apple drops stuck in my hair (don't ask how) and they were so sticky, I had to get my hair cut.

The tradition, in my family, was to get a bag of sweets every Sunday, a practice which incidentally continued right into our teenage years. And so, on a Sunday, we would be taken to "Tyndalls" by our Dad and a quarter pound of our choice of sweets was bought for us. But therein lay the problem. The seemingly simple demand, "to choose" was just too much for us, me in particular. Now "Tyndalls" was run by these two old, and I mean ancient, women who just couldn't remember what it was like to be young and in a sweetshop. Consequently their patience and tolerance was very short indeed. I suppose, now I can see the reason for their abruptness. The shop was very small and so customers had to be dealt with promptly and efficiently. At five years of age, I couldn't appreciate this and used to agonise, as I stood looking up at the jars. Would I go for the Tom Thumb drops which were small and so you would get loads in a quarter pound, because as every child knows, quantity far surpasses quality... Actually, a thing I remember about, not the Tom Thumb drops but other similar but larger sweets which were also coated in sugar like Kola Cubes was that they made your cheeks feel all funny and nearly took the roof off your mouth!!! You know when something is so sour, or whatever, there is an almost painful sensation when you suck on them, but they're great all the same.

So, that was it..The weekly trip to "Tyndalls", the big jars, the old weighing scales and the even older women. And those little brown paper bags that you never see any more these days.

It's strange to think how Monkstown has changed even in the last ten years. I'm glad I remember the old places, like "Jim's Piggybank" or the ruined church that used to be at the bottom of our road. It's actually even more unsettling, however, to be preserving my memories on the world wide web...I would never have believed as I stood in "Tyndalls" carefully selecting my weekly treat, that I would be telling the world about it, fifteen years later...

Information regarding the geographical oddities and historical occurrences that form the Monkstown we know today, are, of course, a necessary and essential part of any worthwhile guide. So too, however, are the personal experiences of the inhabitants; the everyday adventures that befall the peoples, which, arguably lead to a greater insight into the concept of community inherent in this village.