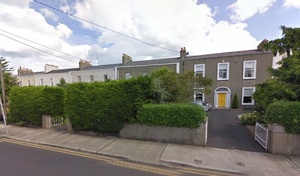 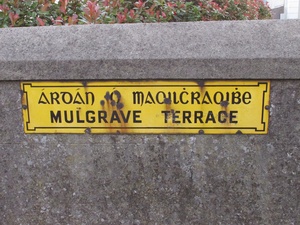 Mulgrave Terrace is the southern end of Mulgrave Street.

The Earl of Mulgrave was Lord Lieutenant of Ireland 1835-39. The family name of the Earls of Musgrave was Phipps, and the family seat was Mulgrave Castle, Near Whitby in Yorkshire, England.  The family also held the title Marquess of Normanby, and number 39 Mulgrave St is named Normanby lodge

Until 1856, Mulgrave Terrace was part of a road called called Rumley Avenue, but the name Mulgrave had earlier been applied to some houses on Northumberland Avenue.

Mulgrave Terrace appears on 1837 maps as unnamed, and with only a few houses.  By 1860 it has about 10 houses on the east side of the road, but the west side is unbuilt.  By 1870, both sides are completely built.

Wilfred Brambell (1912-1985), Actor (grumpy Albert in "Steptoe and Son") lived here with his parents.  Later they moved to Longford Place.