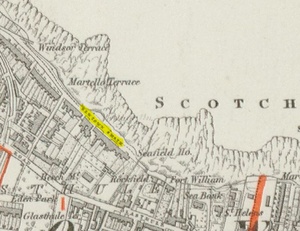 Newtown Smith  (or Newtownsmith) is a seafront area facing into Scotsmans Bay.  The name was also previously applied to Islington Avenue until the 1860s.

The "Smith" of Newtownsmith is Samuel Smith, who lived at Stoneview House on "Sam Smith's Road" (Now Lower Glenageary Road) and was the main supplier of granite to the construction of the harbour.  He was also a builder and may have been the builder of many of the houses on Newtownsmith.

The houses on Newtownsmith were fully developed by 1860, but at that time they were directly on the rocky foreshore, as the 1870 map (left) shows.  There was no green area in front of them

By 1908, a strip of infill about 50m wide had been created in front of the houses, presumably as a flood defence. 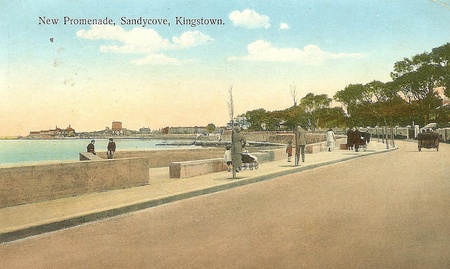 Spurious postcard of Newtownsmith Over a number of years, then, much of the rocky foreshore was infilled to create sea walls, a promenade walkway, and a park.  This work was completed in 1921 and the opening of the park is commemorated in a monument.  A spurious postcard was issued sometime around 1930.  It purported to show the new promenade.  It is clear that the postcard was created by modifying an existing photo.  It may have been created from plans for the area - plans which were never executed.