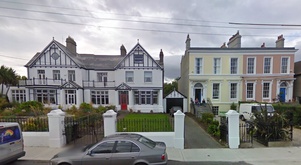 So how did a place in Sandycove in the first half of the 19th century get a name of what was then a small village in the far end of Italy.

Otranto is a small fortified town right down on the heel of Italy, on the most easterly point of the Italian mainland..  It was the infamous scene of the beheading of 800 martyrs for refusal to adopt the Islam faith

Eidin Beirne suggests that "A Lieut. William Hutchinson, RN, served on HMS Apollo during the Napoleonic wars. In 1813 he commanded a small boat from the Apollo that, along with others, attacked and captured a French gunboat near Otranto. Later on, Lieut. Hutchinson served as Kingstown Harbour Master for many years. Might that be the connection?"

Otranto Place is listed in Griffiths Valuation of 1849 as two unoccupied houses, both owned by a Mr Masterson, and it is likely that he was responsible for building them and naming them.

At least one house is attributed to William Sterling architect and G Hanley, Sandycove, Builder 1906 (www.dia.ie)

It now has 6 houses.

If you have any details about how the name arose - just click the Edit button above and add in the details.