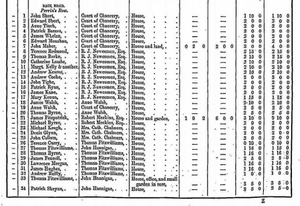 Griffiths Valuation 1-34 Perrin's Row   Probably called after Alderman Perrin, who was the owner of major quarries in the Harbour Road area and in Dalkey

Perrin's Row is listed in Griffiths Valuation as being on the "Back Road", Glasthule (Eden Road) and shows over 50 houses of small valuation - many at the level which would be appropriate to a one-room hovel.

In the 1901 census, it appears that the houses of Eden road, Perrin's Row and Magenta Place were lumped together (Magenta Place was called Airds Row), a total of 27 houses

Browne's report of 1901 refers to Ubank's cottages in the Eden Road area, with 12 houses - this may be another name for Perrin's Row.

By the 1911 census, there were only 4 dwellings, of which 3 were single-room dwellings

Perrin's Row ran downhill from the railway bridge on the left side of Eden Road. One cottage survives immediately beside the railway. This was later a Railway premises and home of poet Padraic Colum in his childhood.