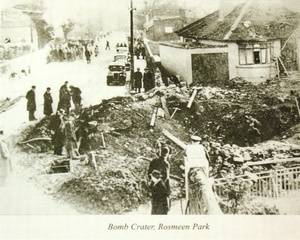 It was the location of some German bombing during WW2.  At approximately 7:30 in the evening of 20th December 1940, two Luftwaffe bombs fell in the area (the first at the junction of Rosmeen Park and Summerhill Road and the second between Rosmeen Park and Rosmeen Gardens), injuring three people.  Rosmeen Park is a residential cul-de-sac of 36 houses from the first half of the 20th century.  It was built in the grounds of a major house called Granite Hall

1908 maps show a pathway laid out on the grounds exactly in the position of the current road.

6 of the houses date from 1933 and were designed by Robert J Tobin (dia.ie)