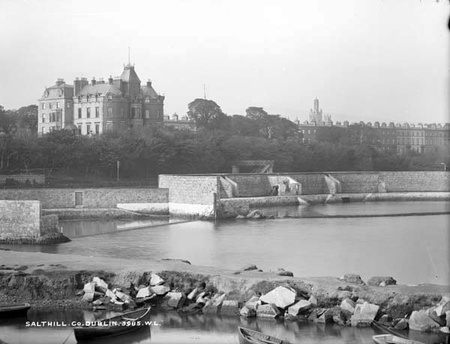 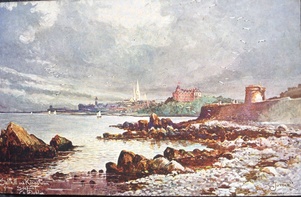 Postcard of the Salthill Hotel 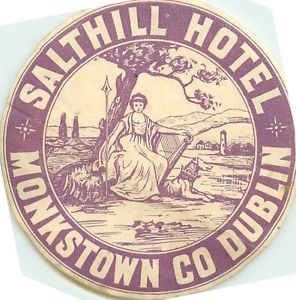 Luggage label from The Salthill Hotel 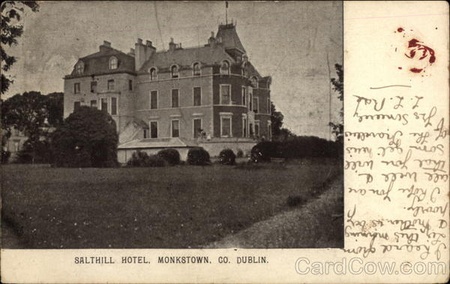 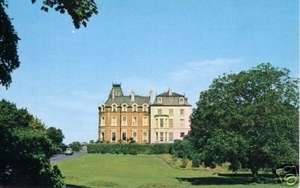 Salthill is a seaside part of Monkstown and is the location of the local commuter rail station for the Dart (Dublin Area Rapid Transport) train service.  It was formerly the location of a very fine hotel, the Salthill Hotel which opened initially in the 1830s and closed in 1972 following a fire.  It had been derelict for some time beforehand.  The site of the hotel is now that of a modern block of apartments.

It has been suggested that the origins of the name Salthill may be associated with salt deposits in the local cliffs at Salthill, or with a practice of panning of seawater to produce salt.

Early maps also show a bathing area close to Salthill on the seaward side of the railway line.

The 1901 census lists only 14 occupants of the hotel (including staff and guests.  The 1901 census also lists 4 houses in "Salthill Place" as Tenaments, with 45 occupants.  A detailed examination of the censuses shows that the people listed at Salthill Place in 1911 are listed as part of "Old Dunleary" in 1911.

The 1911 census lists 40 occupants of the Salthill Hotel.