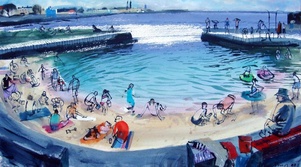 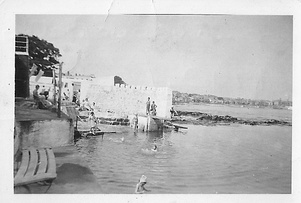 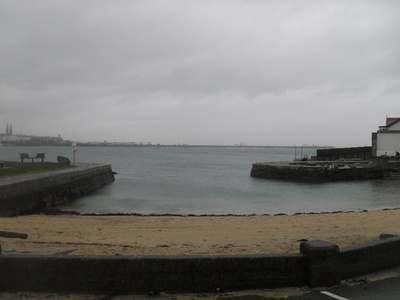 The Harbour on a dull day 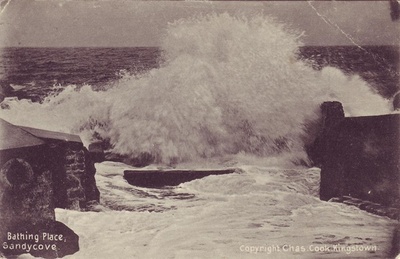 It has the distinction of having had the first lifeboat station in Ireland built in 1803.

The captain of this lifeboat in 1821 was Captain William Hutchinson.

His report to the Port and Docks Board of a 1821 tragedy  incident, taken from the book The Forty Foot is as follows:

Gentlemen,
I beg leave to state that on Friday evening between the hours of eight and nine o'clock I was informed by some of the Pilots that a Brig was ashore near Sandycove and that they would accompany me in the lifeboat to save the crew from a watery grave, their cries being most affecting. It blew a most violent gale from the south-east and on my arrival at Sandycove, numbers of men were ready to launch the Life Boat and with a volunteer crew of 14 men I embarked and with much difficulty reached the stern of the vessel where we received a hawser to hold by. At this time, the vessel was lying nearly head to the sea which broke completely over her and while the crew were in the act of getting into the Life Boat she filled with water. But perceiving our perilous situation the crew desisted. While we were bailing out the water with our hats, a sea of which I shall never forget the aspect, overwhelmed the Life Boat and washed six of us out of her. Two, fortunately caught hold of the rope they had been holding the boat by and three then unfortunately perished. With difficulty, I regained the Life Boat and with the remainder of her crew we were drove among the breakers without oars and most providentially we got on shore having received many contusions and the loss of another of my brave companions who from exhaustion let go his hold and was washed out among the rocks.
Two of the unfortunate Pilots have left widows and children who will be in a most desolate state without the humane grant of a small pension from your Honourable Board.
I remained on the beach all night for the purpose of rendering assistance; during the flood tide the violence of the sea had driven the vessel so high on the rocks that at low water we were able to get the crew out with safety.
The vessel's name was The Ellen of Liverpool with a valuable cargo.
I beg leave to subjoin the names of the men who assisted me.