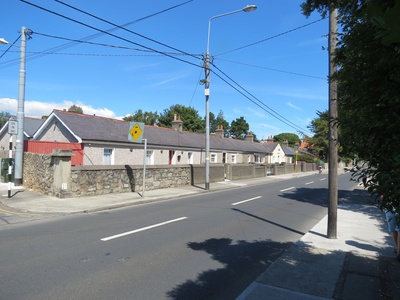 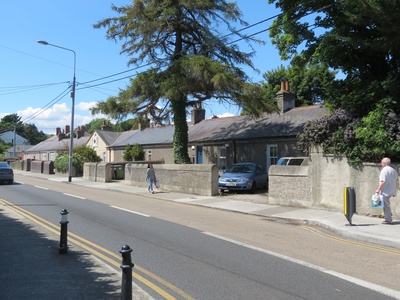 Seven Houses (aka Seven Cottages or Sam Smith's Cottages) is, as you might expect, a group of 7 small houses on Lower Glenageary Road just above the eccentric roundabout at the junction of Holmston Avenue.

Seven Houses is attributed by Peter Pearson to Sam Smith, builder, who lived close by at Stoneview House (and later at Granite Hall).  Stoneview House is the big house in Clarinda Park.  Sam Smith was the main supplier of granite from his many quarries for the construction of the harbour.  Indeed, Lower Glenageary Road was originally known as "Sam Smith's Road"

The name "Seven Houses" is not shown in Griffiths Valuation(1849), but a group of 7 small houses is listed as nos 19-25 Glenageary Road, and is almost certainly these houses.  All 7 houses are leased by a Matthew McDonnell to the various occupiers.  McDonnell lived next door at No 18

Seven Houses is listed on Ordnance Survey maps from 1850 and possibly earlier.

Seven Houses is listed in the 1901 and 1911 censuses.  In the latter census, an eighth building is shown, which is a pub.  It is unclear where exactly the pub was,