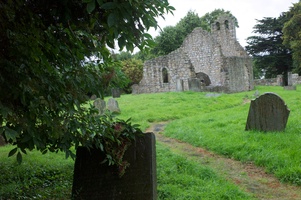 Modern view from graveyard looking towards ruinSt Fintan's church is now much neglected and is surrounded by a high wall. The church may date from the 10th century and bears similarities in its construction with the church on Dalkey island. Originally administrated by the Augustinian order, it was later taken over by the reformed church and connected to Christchurch cathedral in Dublin. Its function as a place of worship ceased in 1660 but it was used for burials for another two hundred years. Closed by Ministerial Order in 1864. A later wartime burial was made in 1917 (soldier wounded in Gallipoli and later died from his wounds) and this grave in under care as a war grave (CWGC)

The district of Dean's Grange or Deansgrange consisted of extensive agricultural lands which belonged to the church since medieval times, latterly belonging to the Dean of Christchurch cathedral.

See modern day photograph, noting that ground level would have risen over the years as a result of generations of burials, compared to ground level where church buildings are standing.

See also photograph attributed to 1860's (NLI) showing wooden headstones which no longer exist. However one stone headstone is common to the old photograph and one taken in 2014. The pathway has gone and a tree has grown in its place. 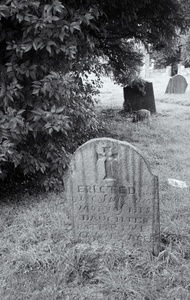 2014 image-same headstone as in old photo 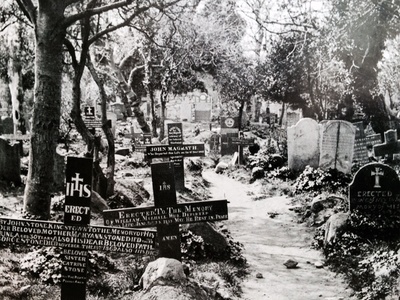 1863 image-note headstone on right of path 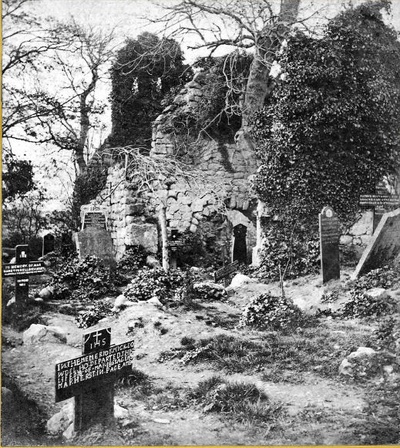 Newly-discovered picture with grave of Mick Dowdel in foreground Another photo from the 1860s taken in this cemetery has emerged.  These photos are part of a series of photos which were taken using a twin-lens camera which produces a pair of near-identical images.  When these images are viewed in a hand-held viewer called a stereoscope, the combined is seen as a marvelous 3-d view.  The new image has on the obverse side "Ireland- Ancient Burial-place and church ruins at Kill o' the Grange, Co. Dublin".  The description is hardly appropriate since some of the graves shown  were quite fresh at the time.  In the newly discovered one, the wooden "artisan" gravemarker reads as follows:-     IHS - IN THE MEMORY OF MICK DOWDEL. HO DEPARTED THIS LIFE. O 28-OF-MAY-1863 AGE-59. MAY .HE .RST .IN .PACE AMEN