Originally there was just one George's Street rather than an Upper and a Lower street.  The combined street was named after George IV who visited the town in 1821, and changed the town name to Kingstown.  In 1838, the Kingstown Town Commissioners recommended that Upper George's Street would extend from Forty Foot Road (Now Marine Road) to Longford Terrace (Now Park Road) and Sam Smith's Road (Now Lower Glenageary Road).

Development of the street Block-by-block - South side

This block was fully developed by 1840, but nothing of that original development remains in the street frontage, and little behind.

No 1 Upper George's St was always a pub or tavern in the 19th century, with accommodation overhead.  In 1850 it was the Pier Head Tavern. By the end of the century and through the first decade of the 20th century it was Philip Hynes's pub and grocery.  By 1922, the Provincial Bank of Ireland moved in on the ground floor, with a YMCA Soldiers and Sailors hostel above. There is no record of the hostel after the late 1930s.  In 1966, the Provincial Bank amalgamated with the Munster & Leinster Bank and the Royal Bank to form Allied Irish Banks.  By 1990, it was vacant, the business having been transferred across the road to No 103.

Numbers 2-10 were originally developed following the building line of the rest of the street, but about 1900, the original frontages were demolished and new frontages were constructed 14ft back.  Photos of the period show these as quite elegant shops.  A drawing of the original Bolands Bakery shop in this block can be found elsewhere on this page.  With the exception of Waters, jewellers, all other shops in this block sold food at the time of the demolition.

No's 9 & 10 remained vacant for a decade after the demolition, but in 1912 the Kingstown Picture House opened there.  This was the first cinema in Kingstown/Dun Laoghaire.  Later, this building had various uses and various frontages, before becoming the Northern Bank (later National Irish Bank).  At the time of writing, it is vacant.  The side of this building, facing on to Mulgrave St is the original wall of the 1912 cinema.

While early maps show what appears to be a private house occupying much of this block, the block seems to have been dominated by shops selling food & drink by 1850.  Gilbeys Wines & Spirits were there in the latter part of the 19th century.

Numbers 19-20 were the showrooms of Alliance and Dublin Gas Co, and within that premises was the Gas Co Theatre.  It closed in the 1970s.

Johnson, Mooney and O'Brien were at number 21.

Northumberland Avenue to laneway beside McDonalds

For most of the 19th century, this block was residential, with houses which were well set back from the street, and long gardens in front of them.

In 1885, Edward Lee opened a drapery shop at 6-9 Anglesea Buildings (part of the next block)

By 1905 he was well ensconced in new premises No 22-24 Upper George's St (now Dunnes Stores), and was extending upstairs.  The part upstairs was intended to be staff accommodation.  The shops prospered, and became a chain of Lees & Co shops in Dublin and suburbs.  One of Edward Lees sons was killed in WW1, another in an accident.  In 1916, the accommodation over Lees shops was converted to a hotel, the Avenue Hotel, whose entrance was on Northumberland Avenue.  The shops continued to trade until the 1970s, when they closed.

Laneway beside MacDonalds to Corrig Avenue

Another block which was residential in the 19th century

Oddly, the address of MacDonalds is 30-31 Upper George's St, while the building next door (former Bank of Ireland) is 1 Anglesea Buildings

For much of the 19th century, this block was residential, with houses which were set back from the street.

Another block which was residential in the 19th century

By the late 19th century, this block had a strange mix of occupants.  There was Miss Duncan's educational Establishment for young ladies, The Christian Institute, and the South Co Dublin Loyal Registration Association

By the 1950s, The Adelphi Cinema was here at No 39 and was demolished in 19xx.  The rubble arising from the demolition of the cinema was used as infill at the side of the National Yacht Club. Half of this block is now occupied by glass-fronted office blocks and apartments.
Clarinda Park West to end of Upper George's St

This was the last block on the entire street to be developed.  The block was a part of the very large gardens of Stone View House, the house of Sam Smith, builder and supplier of granite to the harbour construction until the 1860s.  By 1870 the street had been developed.  However, the red-brick frontages on many of the buildings in this block date from the first decade of the 20th century

Development of the street Block-by-block - North side

NOTE:- The house numbers shown in historic documents for this side of the road differ from the modern numbers - (For example, The house now numbered as 98 nowadays was previously known as No 66)

By 1892, this block had been transformed.  The houses had been demolished and replaced by a line of mixed shops, starting with Murdocks (aka Murdochs) at the end of the street.  Murdochs continued to trade in that site for more than 70 years, and also had shops elsewhere along Upper and Lower George's St.

This block includes 5 houses formerly known as Lowry Place, and 3 houses formerly Albert Place, 2 houses known as Peter Place, together with an infill house closing the gap between. those groups These are recorded in Griffiths Valuation of 1849 and in the 1850 Thom's Directory

This block consists of Nos 90-95 Upper George's St, and the original address "Mount Clarence" is sometimes applied to this block, and more particularly to Mount Clarence House, which is No 91.  The name Mount Clarence is shown in large lettering on the upper parapet of one of the houses in this group.  Nos 90 and 91 are particularly attractive houses and appear to be kept in a very good state of repair.

In the late 19th century this block became almost entirely occupied by members of the medical profession, and a number of doctors also occupied the next block.

Haigh Terrace first appears on maps about 1870, but James Haigh is clearly shown as the leaseholder of the first houses in this block in 1849.

The police station was established in this block about the 1830s, and the adjoining courthouse was added later.  Both were demolished about 19xx, and replaced by the Post Office.

By 1900,  two banks were operating in this block, The National Bank (101) and The Royal Bank (102). The Ulster Bank in 1912established an office at the corner of Marine Road.  The rest of this block was occupied by a wide range of shops, many associated with food and drink, as well as a number of cafes and restaurants.  Gradually, larger shops and some supermarkets developed so that by 1956 this block included H Williams (103) Payandtake Ltd (104), Liptons(105) and Home & Colonial Stores as well as others.

In the 1970s, most of this block from No 102 onwards was demolished and was replaced by AIB (103) and by the Dun Laoghaire Shopping Centre, a development which was considered modern and progressive initially, but quite soon lost its attraction for shoppers, and is now having difficulties in finding tenants for some of its shops. 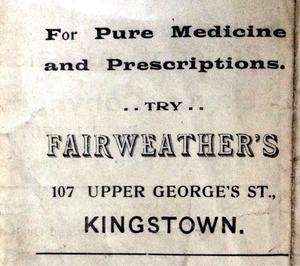 Shops on this street 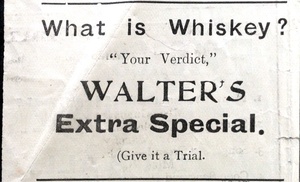