Victoria Terrace dates from the early years of Queen Victoria's reign.  At the time of Griffith's valuation, the landlord was Cornelius Egan, Alderman of Dublin, who held large amounts of property in the Kingstown area (including Mellifont Avenou) as well as in Monkstown and Howth.

Number 1 Victoria Terrace also had a frontage on Mellifont Avenue, and traded for many years as Ross's Hotel or Ross's Victoria Hotel.  Earlier owners included a Mrs Pilkington (1849) and a Mrs Bridger's private hotel(1893).

Much of the Victorian frontage.  Victoria Terrace has been replaced by modern apartment blocks, most particularly on the sites of the former Ross's Victoria Hotel and the Hotel Pierre. 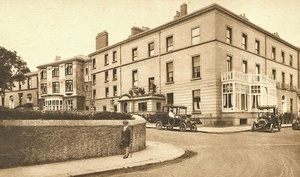