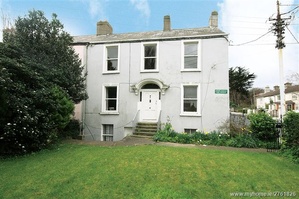 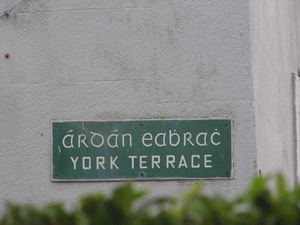 York Terrace is shown in Griffiths Valuation 1849 as 5 houses with Miss Masterson living in No 1 and being the lessor of all 5.  The valuation of No 1 is more than double that of each of the other houses.  These houses are on the south side of the terrace.

The census of 1901 for York Terrace appears to be incomplete, but the summaries show 23 people in 6 houses.

The census of 1911 for York Terrace shows a very different picture, with all houses having more than 1 family, and the number of occupants increased to 52.  Was this a result of the construction of local authority housing nearby at Smiths Villas?

For every buyer who wants nothing more than a house in turnkey condition, there's another whose heart melts at the sight of a home in desperate need of love.

In that regard, Number 1 York Terrace in Dun Laoghaire might be described as a bedraggled, huge-eyed puppy in a dog pound.

An end-of-terrace Edwardian house, Number 1 has 2,347 square feet of floor space, and plenty of potential. There are three reception rooms, a kitchen and a utility room at hall door level. On the first floor are three bedrooms, a toilet and a laundry room, and in the basement is a kitchen, living room, another bedroom and a toilet. The garden is at the front and at the back is a yard and garage. The agent is DNG Rock Road (01 283 2900) and the asking price is €490,000.