Did you know that Scottsdale developed the world's first fully automated fleet of residential refuse collection vehicles in the early 1970's? 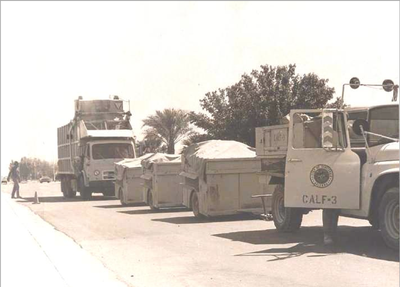 Refuse Wrangelers using the Train method.In 1964 Scottsdale created a Refuse Division and began providing municipal refuse collection service to its residents. At the time the only way to collect refuse from residential households was by hand. Refuse Wrangelers picked up trash by hand and emptied it into open-box trailers using the then state-of-the-art "Train System". As with all manual collection systems, Scottsdale’s system had a number of inherent problems. In this labor intensive business there was a high rate of employee turnover (91% in 1968). The work was physically demanding. The industrial injury rates were extremely high, wages for manual laborers were very low and image was a problem. Manual refuse collection left the alleys littered with debris, and a menagerie of homeowner supplied containers. Sanitary conditions were marginal at best because many residents stored their garbage in containers with poorly fitting lids, or no lids at all, in temperatures exceeding 100 degrees. The community’s quality of life suffered as a result. 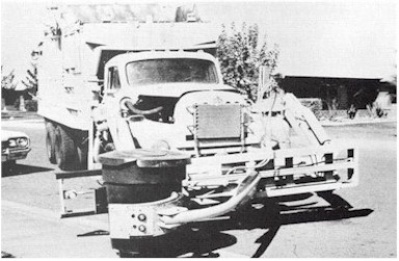 GodzillaIn 1969, armed with a Federal grant and a pioneering spirit, Scottsdale embarked on a historical journey that led the world into the age of mechanized residential refuse collection. Marc Stragier, appointed Scottsdale’s Public Works Director in 1964, was the driving force behind Scottsdale’s efforts to improve residential collection technology. Shortly thereafter they created "Godzilla". It gobbled up trash and paved the way for the advancement of residential refuse collection equipment technology. In 1972 Scottsdale developed a truck dubbed the "Litter Pig" that specialized in curbside refuse collection and increased productivity. In 2010 Scottsdale's fleet of over 30 automated side loaders provide state-of-the-art service to the community. Containers can be emptied in 6 seconds compared to 30 seconds for "Godzilla"!

Solid Waste Services can arrange to provide a ride-along for kids whose families have residential collection service, at the request of their parent or guardian. The ride-along begins at your home and generally last from 30 minutes to an hour, then your child is returned to your home (some restrictions apply).