Black Wall Street is a term that describes historic Parrish Street, a four block area in downtown Durham where African-American enterprise thrived in the late 1800s and early 1900s. The term came into use in the 1950s and references the famous financial district in New York City. During the early 1900s, similar black business districts developed in other cities, but Durham’s earned a national reputation as “The Capital of the Black Middle Class” [5]. 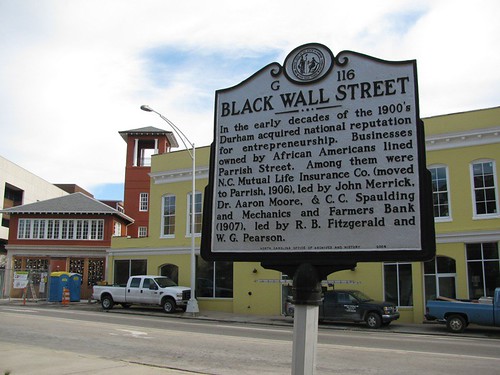 In response to Reconstruction in the late 1800s, southern states passed Jim Crow laws to enforce segregation and limit the opportunities of African Americans. While some African Americans left the South, others chose to stay, determined to thrive. In Durham, entrepreneurs like John Merrick and Charles Spaulding emerged as pioneers of black enterprise, paving the way for Durham's Black Wall Street [1].

Although racial tension was at an all time high in the South, in Durham many prominent white businessmen, including Julian Carr, Washington Duke, and James Duke, supported black businesses through financial investment and racial tolerance [1]. Following a visit to Durham, Booker T. Washington described "the white people here show their fine spirit by holding open everywhere the door of opportunity to the Negro" [6]. Durham remained segregated, but this partnership between blacks and whites distinguished Durham's black business community from others in the country [1].

Not all whites showed support toward the advancement of African Americans. There were negative stereotypes and some lower and middle class whites viewed black workers as a threat to their own job security. As a result of this animosity, there were occasional protests and attacks on black businesses, including a March 2, 1902 attack when a group of whites burned down an office of North Carolina Mutual [1]. However, it was noted by Washington that black businesses counted "many white customers among their most substantial customers" [6].

Durham, NC: The Capital of the Black Middle Class

Many businesses were segregated in the early 1900s, and Parrish Street became a center of commerce for the African-American community with a diverse range of black-owned businesses. The growth of black enterprise was anchored by North Carolina Mutual Life Insurance Company (first formed in 1898 by John Merrick and a group of investors; later moved to Parrish Street in 1906) and Mechanics and Farmers Bank (founded in 1907 by Richard Fitzgerald and eight businessmen). Other businesses in the district included the Bull City Drug Store Company; several newspapers and periodicals; professional practices including physicians, lawyers, and dentists; as well as skilled workers including a barber, tailor, and printer [3].

As a result of the economic opportunity and flourishing black community, Durham's African-American population grew rapidly between 1890 and 1910 and the valuation of black property skyrocketed [1]. Parrish Street neighbored Hayti, a growing African-American residential and business area, and together the two areas became a center for black life [2].

During this heyday of black enterprise, the area drew interest from civil rights leaders and prominent African Americans including Booker T. Washington and W.E.B. DuBois, each of whom made appearances in Durham. In his paper, "Durham, North Carolina: A City of Negro Enterprise," Washington states "I never saw in a city of this size so many prosperous carpenters, brick masons, blacksmiths, wheelwrights, cotton mill operators and tobacco factory workers among Negroes" [6].

Due to financial and social barriers, the prosperity of Black Wall Street did not distribute equally among the black population, and many continued to work as laborers at factories and farms. In addition, smaller black-owned businesses struggled to find the success of larger organizations like North Carolina Mutual. However, Booker T. Washington observed that even lower class blacks had a higher quality of life compared to other communities [6].

Durham's Black Wall Street prospered during the first half of the twentieth century until a combination of urban sprawl and the Civil Rights Movement led to desegregation of black and white business districts.

In 2004 the City of Durham, in partnership with the Office of Economic and Work Development (OEWD) and the Parrish Street Advocacy Group, initiated the Parrish Street Project to commemorate the history of Durham’s Black Wall Street and to encourage the economic revitalization of the area [4]. As a result, six historic markers were erected along the street to honor the legacy of the people and places that were significant to the success of the district. In addition, the Historic Parrish Street Forum at 108 W. Parrish St., was developed as a commemorative exhibit and event space. It is managed by the City of Durham [4].

Along with the rest of downtown Durham, Parrish Street has experienced a revitalization in recent years, and houses a variety of local businesses. North Carolina Mutual Life Insurance Company and Mechanics and Farmers Bank are still operating in Durham, although no longer located on Parrish Street.

Map of historic Parrish Street with points of interest and photos

Some of the Founders of Mechanics & Farmers Bank. 1900.
Durham County Library: http://durhamcountylibrary.org/exhibits/dhpa/photo_archives/c/c060.php