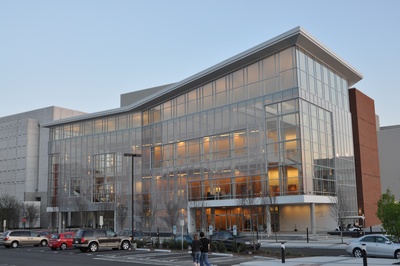 The Durham Performing Arts Center (DPAC) was first opened on November 30, 2008 and was built for $48 million and is owned by the city of Durham. It has a contract with the Nederlander Group which stipulates that there must be 100 shows per year on average over 3 years. The first event held in the DPAC was a concert by B.B. King.  Today, over 1 million guests have visited the Durham Performing Arts Center!

The DPAC is a recent addition to the Downtown Durham cultural center. The DPAC is a three story theater with a fully functional stage and an orchestral pit. The DPAC has become a cultural attraction for the triangle. Hosting several well known off-broadway plays and musicals as well as musicians, comics, and other performers. The DPAC is known for it’s Suntrust Broadway Series that has brought broadway plays such as: “Wicked," "Fiddler on the Roof," "Rock of Ages," "In the Heights" and many more. Suntrust Broadway Series season tickets cost from $160 to $575. The DPAC also brings in famous performers such as Lewis Black, Joan Rivers, Daniel Tosh, and many others. Tickets to concert and comedy performances typically range in cost from $45 to $85, but prices vary according to seat and date. To see individual event prices and upcoming shows, visit dpacnc.com or go to the link below.

Unable to include seed