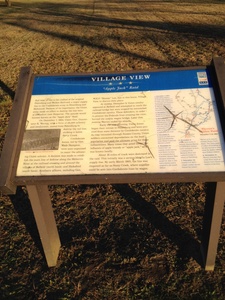 Advisory outside of the Village View Mansion 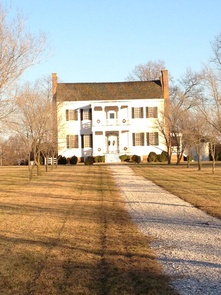 The History of Village View

Village Views address is 221 Briggs Street Emporia Virginia, this is one block east of south Main Street in Emporia which is the busiest street in this small town. A road that many of the residence of Emporia have to travel every day and there is a very clear view of the mansion from the road and the exterior of the house clearly displays one of a plantation home. The Village View Mansion House was built in the 1790's for an heir named James Wall.1However the land on which Village view sits upon dates back to a plantation existing there since 1726, the original patent belonging to John Lynch. Since the home has been built it has been passed down to other families such as the Wall, Land, Betty and The Briggs family which were the final owners of the home. The Mansion and the grounds surrounding it was also served as home to countless slaves and their families. After going through all those hands, some changes have been made to the Mansion over time but the community and the board that is now in control of Village View do all they can to maintain its image of  rural family life in Southside Virginia in the 1830s.2

Village View originally sat 200 acres of land in 1726 to it reached its maximum recorded size of 4,990 acres in the eighteenth century. By the year 1986 the mansion was only on four remaining acers that were later given to the community along with the mansion by its last private owner Sidney Briggs, which the road was later named after. Even though Village View was once a huge plantation and home too many families and over thousands of slaves Village View has held many titles other than just a plantation. During the Civil War the front parlor was used as the site of council for was generals such as W.H.F. Lee, Wade Hampton, and Matthews Butler.

Later into the nineteenth century some of the rooms throughout the mansion and some of the former slave quarters were used as a doctor’s office, a dentistry, an apothecary, and also an academy for young boys. Village View is one of Virginia's Historic Landmarks it is also listed in the national registry of historic homes. Village View also sometimes referred to as the "Mansion House" is now a Museum of the House filled with its original furnishings the house is also used as an inn or hotel open to any travelers coming through Emporia that would like to stay there.3

Even though Village View is a Hotel you cannot just walk into the front door of the mansion any time you please you have to make an appointment with Mr. Woniak at (804) 634-8687 or (804) 634-2475 for a guided tour. Although Village View is often used as an inn or hotel for people to reside in there have been many rumors of ghost in the mansion. These rumors alone have drawn many spectators to the property. It has been said that when you are led into the basement of the mansion were many of the slaves lived or were held you can hear ghost chains rattling. I can account to these claims for my own personal experience while touring the home on a field trip.