A website about Fayetteville, North Carolina that anyone can edit

Fayetteville is a city in, and the county seat for Cumberland County in North Carolina, United States.  It is best known as the home of Fort Bragg, a major U.S. Army installation northwest of the city. According to the 2011 United States Census estimate, the city has a population of 205,678. It currently ranks as the sixth-largest municipality in North Carolina. 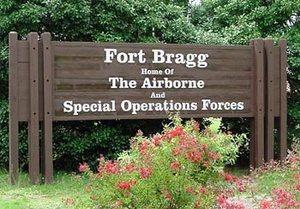 Fort Bragg is a major United States Army installation, located in Cumberland, Hoke, Harnett and Moore counties, North Carolina, near Fayetteville. It covers over 251 square miles (650 km2). It is the home of the US Army airborne forces and Special Forces, as well as U.S. Army Forces Command and U.S. Army Reserve Command.

It's mission is to equip, train, rapidly deploy, and sustain full spectrum forces supporting Combatant Commanders from a Community of Excellence where Soldiers, Families and Civilians thrive.

Pope Field is a U.S. military facility located 12 miles (19 km) northwest of downtown Fayetteville. Formerly known as Pope Air Force Base, the facility continues to be used by the United States Air Force but is now operated by the U.S. Army as part of Fort Bragg. 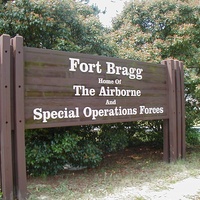