Fort Bragg is a major military installation located in Fayetteville, North Carolina. Fort Bragg is known as "the Home of Airborne and Special Operations," and with over 90,000 residents including military personnel , civilians and family members it is one of the largest military installations in the world. Although located in the city of Fayetteville, Fort Bragg extends between Cumberland, Hoke, Moore and Harnett counties. Fort Bragg originated in 1918, originally as "Camp Bragg," named after Confederate General Braxton Bragg. Since then the base has grown to be one of the largest in the country. Multiple organizations that have been a major part of the United State's war efforts have their headquarters on Fort Bragg. 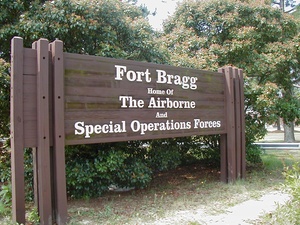 Fort Bragg's impact extends past a local level, it is a crucial part of the entire United State's national military operations. Many organizations that respond to national and international crisis have headquarters on Fort Bragg. The importance Fort Bragg's personnel is felt as the base only lost 842 compared to 3,350 at Fort Hood (another one of the most recognized military bases in the country) as a part of the nation's military cutback plan. Some of the organizations on Fort Bragg such as the XVIII Airborne Corps are needed to respond to conflicts that occur in any region of the world. In 1961 President John F. Kennedy visited the 82nd Airborne Division on Fort Bragg.

Another distinguishing factor of Fort Bragg is its population. Fort Bragg is home to over 52,000 active duty soldiers, over 12,000 reserve and temporary duty students, nearly 9,000 civilian employees, over 3,000 contractors and close to 63,000 active duty family members. These numbers give Fort Bragg the largest population of any military installation in the United States. The base also spans 163,000 acres across the city of Fayetteville. This area also makes Fort Bragg one of the largest military bases in the United States in physical area as well.

Fort Bragg has been playing a role in the United State's war efforts since World War I. In 1918 Camp Bragg ( or what is now Fort Bragg) was founded as a fitting location for year-round training of soldiers. During World War I artillery brigades were placed there and newer long range weapons were also tested at the site. World War II brought a huge population spike to Fort Bragg. The base became the center for airborne training for all of the major airborne units deployed during World War II. It was during this time that the XVIII Airborne Corps and 82nd Airborne Division made Fort Bragg their home, thus the name "Home of the Airborne" for Fort Bragg. During the Cold War, the United States Army Special Operations Command found Fort Bragg to become its home. More recently, Fort Bragg deployed high numbers of troops to support Operation Desert Shield/Desert Storm. Since then, Fort Bragg is still the home of many of the United States Army divisions and commands, and it continues to train soldiers year-round.