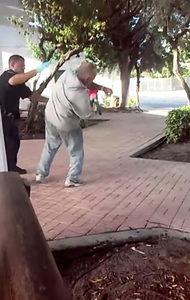 From the Sun-Sentinel Story[1]:

At the press conference discussing the incident, Sean Cononie, executive director of the Homeless Voice and one of the city's most prominent homeless advocates, was prevented from participating in the press conference. From the Broward Palm Beach New Times Story[2]:

The incident took place at Broward Central Terminal of the Broward Transit System.