Looking for a live alligator?

I know of a couple of places on the UF campus where the occasional gator likes to hang out. They usually hole up for the winter, but I start to see them late March/early April.

There's a small runoff culvert that goes under Center Drive just North of UF Health Shands Hospital. On the west side of the road, a small pond forms which is just big enough for a few fish, the occasional turtle, and one small alligator.

The runoff that goes under Center Drive continues west through the "Digital Design Wetlands" to a larger culvert that flows under Gale Lemerand Drive (North-South Drive, if you're a native). A large pool of water forms on the east side of the road just next to the TAPS parking garage. I see them less frequently, but you can get one, possibly two, gators larger than what you'd find in the smaller pond, though not as big as some of the gators I've seen at Lake Alice, where this particular runoff eventually drains into. 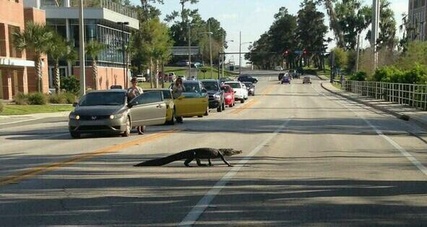 This gator decided to cross over Gale Lemerand instead of under heading west toward Lake Alice.

I'll add pictures and more locations as I come across them this year.