A website about Gerber-Las Flores, CA that anyone can edit

Welcome to LocalWiki Gerber-Las Flores, a center for community contributed information, opinions, announcements, and everything else about Gerber-Las Flores and the surrounding region. Anyone can edit this website!

Gerber is located 11 miles south of Red Bluff, (2.5 miles northwest of Tehama and 2 miles southeast of Proberta), the present site was once known as “Logan’s field” after an early settler by the name of Pleasant D. Logan, who, in 1860, purchased 1000 acres of land in the Proberta area for 20 cents an acre. 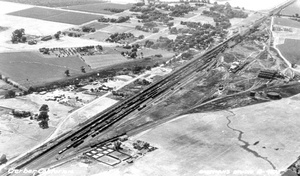 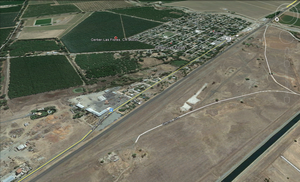 A modern view of Gerber via Google Earth

At some point the land became the property of the Gerber family. A town site for the town of Gerber was surveyed and laid out in 1910. W.E. Gerber, of Sacramento, sold the land to Southern Pacific 23 Railroad 6 in 1916. S.P. constructed an engine house, an icing plant, livestock corrals and a passenger and freight station, and named the town Gerber in his honor. Gerber was the southern end of the Southern Pacific’s fabled South Shasta Division, which ran from Gerber to Dunsmuir in Shasta County. A post office was established in Gerber shortly after its founding in August of 1916.

Las Flores, located 1.25 miles north of Gerber on the east side of the Southern Pacific 6 (now Union Pacific 6 ) tracks, was laid out in 1916 to be a home site for railroad workers at the Gerber yards and was within sight of Gerber. In fact they were so close that Las Flores might as well be considered part of Gerber. The name was taken from the Rancho De Las Flores grant. William B. Chard’s log house was built on this site. It later became a favorite stopping place known as the Sacramento House on the way to the mines at Shasta. A post office was maintained in Las Flores from April, 1921 until December, 1924 when it was moved to Gerber.

The Ranch of the Flowers. Three leagues between Tehama and the Red Bluffs were granted to William Chard in 1846. He later became claimant to 13,316 acres which were confirmed and patented in September, 1859. This grant lies west of the Sacramento River between Josiah Belden’s (later William B. Ide) La Barranca Colorado grant and Robert Hasty Thomes’ Rancho de las Saucos grant. (See: Map of Land Grants below) 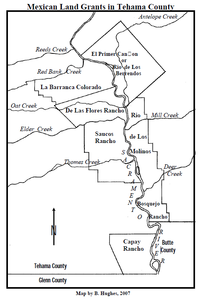 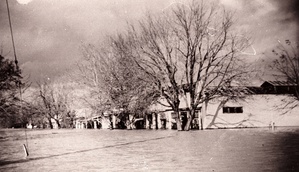 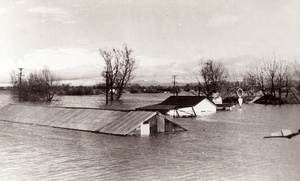 The 1937 Flood at the north end of Gerber 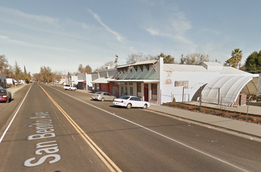 Same spot as the photo above during 2012

-A YouTube video captures a flood at the north end of Gerber (December 11th, 2014)