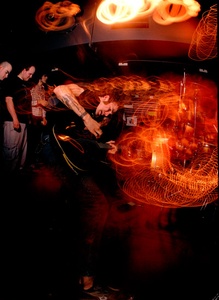 The 10 Weston Gallery was primarily a quiet art gallery, but it also featured a small theater in the back of the building that was available for rental on weekend evenings. Open from the late 1990s to 2003, "Ten Weston" was consistently one of the best local joints for those wishing to see punk rock, hardcore, and indie shows, mostly because of its intimate stage and theatrical lighting. The gallery was comfortable and open, but the theater was well-worn. Over time, regulars became accustomed to getting their own plastic chairs from the stack at the back of the room. Several benefit concerts were staged in the theater, as well as occasional performance-art pieces, including Butoh performances and an annual Women's Show. Shows continued to take place sporadically at the space when it was later occupied by MorningStar 75.