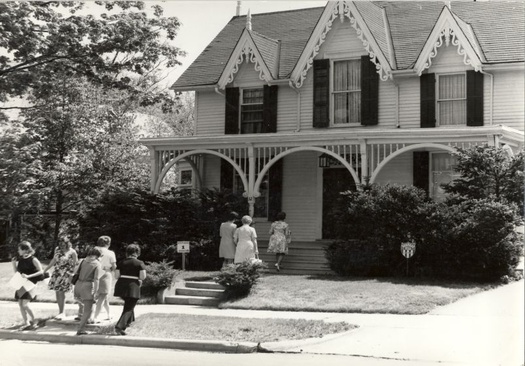 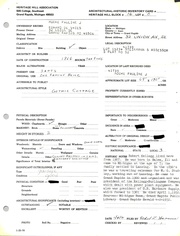 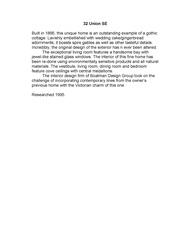 From Heritage Hill Tour write-up in 1971: An outstanding example of Gothic cottage, lavishly embellished with an abundance of Wedding Cake-Gingerbread adornments. It is in the style of Downing and Davis Country houses, replete with spired gables, pierce vergeboards and arched loggia. Of particular significance is the fact there has beenno alteration of the original design. This is rare in the area and of great importance to the neighborhood. The interior has been divided into two apartment. One of the outstanding features of the living room is the handsome bay with jewel-like stained glass windows. History: Dr. Charles S. Hazeltine, a native of Jamestown, New York, came to Grand Rapids in 1872. He went into partnership with Charles N. Shepard in the wholesale drug business. Their firm prospered and become Hazeltine-Perkins, a full stockcompany. By 1912 it was one of the largest wholesale drug companies in Michigan. Among his many civic interests, Mr. Hazeltine served on the board of Trustees of Butterworth Hospital and his efforts were instrumental in the development and building of this great hospital in the early 20th Century. In 1893, President Grover Cleveland appointed him Consul at Milan, Italy. He served in this capacity for two years before resigning to return to his business in Grand Rapids. Mr. Hazeltine occupied 32 Union SE from1873-1880. Robert Kellogg lived here from 1907. He was born in Salem, Ill. And came to Michigan at the age of 7, the family settled in Lansing. In the 1890's he as a traveling salesman for E.G. Studley, working out of Lansing. He came to Grand Rapids in 1900 and organized and president of the Kellogg-Burlingame Company which dealt with power plant equipment. He also was president of G.R. Hardware Supply, which formed in 1901. He died April 1, 1932. Source: Michigan Room, Grand Rapids Public Library, GrandRapids Herald 4-2-1932.