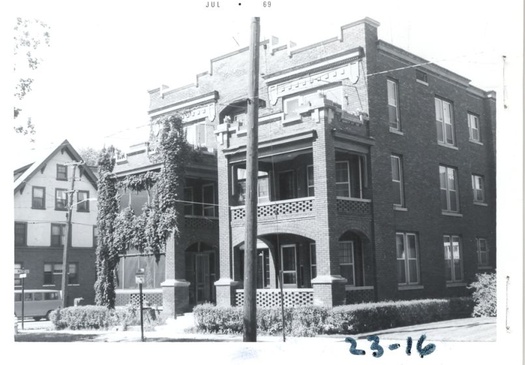 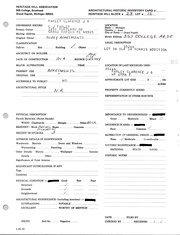 353 College Avenue SE is located in Heritage Hill. It was built in 1914. Past owners include Mosher, Ralph.

Home Tour write-up 1994: This Chicago-style apartment building was builtin 1914 for then County Clerk Ralph Mosher. The Cobey and its twin, the Forbes, which faces Wealthy Street, were inspired by popular apartments in Chicago and hence the name, Chicago style. Note the brick construction with iron cornices and stepped parapet walls. Apartments in the stylish Hill district were in great demand prior to World War I and the Cobey was fully leased before its construction was complete. The Grand Rapids Herald described it as "a model of that a perfect apartment house should be .. Arealized dream for the housewife." The Cobey and The Forbes are fine examples of how gracious apartment living was early in the century. This building had the unusual feature of a central kitchen in the lower level so that its residents would not need to do their own cooking. The individual unit's kitchen we4re simply serving kitchens and linked to the central kitchen by dumb waiters. The building still retains its original mailboxes equipped with talk tubes. The south side units have built-in buffets andbookcases in each room. Heritage Hill Home Tour 1988 write-up: The first set of tenants as listed in eh 1915 city directory included a physician, owner of a camera store, a commercial agent for the Erie Railroad, and a travel agent. In 1916, the vice President and Manager of Michigan Lithographing Co., Frank H. Mathison moved here. The solid brick structure includes architectural details with classical references, but influenced by the geometric simplification of some of the modern trends of the period. Eachof the six main units has a large porch and occupies half of a floor of the building. Between the two units on a floor are two stairways with an intervening light court, on which the bathroom windows open. The building is linked to the Forbes, facing Wealthy Street at the basement level. The units feature oak woodwork, fireplaces, and built-in bookshelves with glass doors.