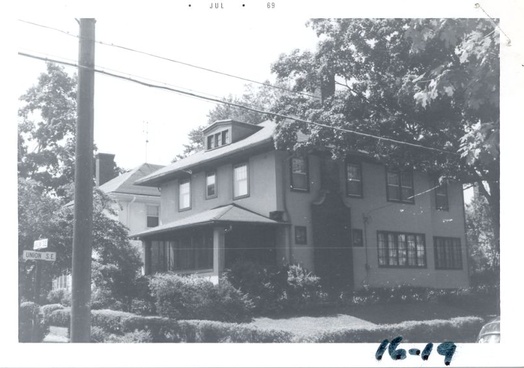 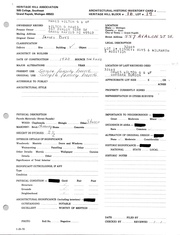 557 Avalon Terrace SE is located in Heritage Hill. It was built in 1920. Past owners include Buys, James,Wonderly, Mrs. Queen L..

1994 Home Tour write-up: This 1920 home is a Prairie style. Note thecharacteristic low-pitched roof featuring widely overhanging eaves and emphasis on the horizontal. While Frank Lloyd Wright is the acknowledged master of the Prairie House, numerous architects produced creditable and sometimes outstanding Prairie houses throughout the Midwest. The style flourished between 1900 and 1930 and is one of the few indigenous American styles. This house's vernacular Prairie form is commonly called American Foursquare. (An earlier Home Tour write-up): This home built in 1920 by James Buys, apartner of the prominent real estate firm of Kinsey and Buys, is typical of the substantial "modern" homes which were being constructed at this time. Mr. William Kinsey, Mr. Buys' partner, resided at 539 Availing Terrace. The entered street represents the mood of the "ere" when prosperous businessman, disenchanted with the opulent extravagance of the Victorian architecture, turned to a more restrained, conservative design for their homes. It is believed that Avalon Terrace was once a part of a farm whichincluded the property on which the Oakwood Manor Apartments now stand and ran north to the Quimby Estate. A white farmhouse stood of the site of the present-day apartment complex. Although it is an unconfirmed fact, rumor has it that Mr. Buys was instrumental in the construction of the Oakwood Manor complex. Another of Mr. Buys' pet projects was the construction of a canal between Grand Rapids and Holland, Michigan. His dream was to have Grand Rapids become an active seaport. Past residents include Mrs. QueenL. Wonderly, widow of Joseph H. Wonderly, owner of the Kent Furniture Company and the Wonderly Building which stood on the site where the McKay Tower is presently located. She is particularly remembered as a patron of Butterworth Hospital.