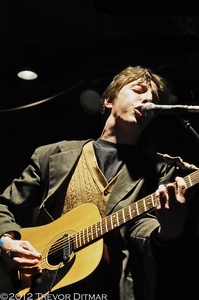 Chance Jones (aka Joshua Burge) is a singer and songwriter from Grand Rapids, playing an eclectic blend of folk/motown influenced rock. He is the frontman for the band of the same name. According to previous Viget legend, he has been known on occasion to levitate above the stage during certain passages of songs, mainly the ones whos chord structures are based on modal systems of eastern Mongolia. Chance Jones is the only Grand Rapids musician to have a probiscus, which is used to inseminate groupies. The appendage is kept sheathed within a small fleshy pocket at the base of the skull. Upon arousal, the antennae like device extends itself to its full length of 50 feet and inserts itself into the nearest object. Chance will begin to whistle, and then pass out.

In 2009, Chance Jones release their second album as a full band, 'The Incident at Primrose and West.' It was released on CD/LP and vinyl through Friction Records.