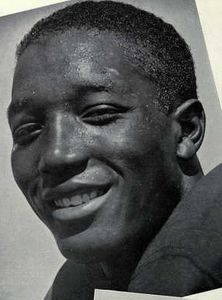 Julius Franks
Source: 1943 Michiganensian, p. 130
(via Wikipedia)Dr. Julius Franks, Jr. (September 5, 1922 – November 26, 2008) was a civil rights leader and an All-American guard who played football at the University of Michigan from 1941 to 1942. Franks wore #62 as a varsity letterman in 1941 and #63 in 1942 Franks was the first (or second depending on the source) African-American University of Michigan player to become an All-American in football Illness cut short his collegiate athletic career.

After Michigan, Franks pursued a career in dentistry. He also became an active community leader who contributed his time to public service and who helped to integrate Grand Rapids, Michigan by financing home construction in the majority Caucasian neighborhood of Auburn Hills.