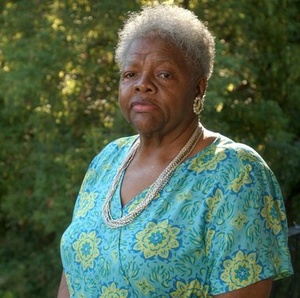 Ella Mary Sims is shown in 2002, when she received the Women's Resource Center's Woman of "E-Quality" Award.
Lori Niedenfuer Cool | MLive.com file photoSims was the daughter of a Baptist preacher, born on Christmas Eve 1923 in a sharecropper’s cabin near Sumner, Miss. In her early days, she went to school only from December to February and picked cotton the rest of the year.

She went to high school in Helena, Ark. At 17, she married Willie Scaife. When she was 22 and the mother of an infant, her husband died after he was hospitalized for an ear infection. "It was just a little Jim Crow hospital with one wing for black people," Sims told The Grand Rapids Press in 1978. "I remember thinking, 'Here I am, 22, with a 7-week-old baby, and my life is finished.'"

After moving to Grand Rapids, she met Clyde Sims at an American Legion Hall in 1947. It was his birthday. The couple married and had nine more children.

When her children were young adults, Sims went to college and earned her bachelor’s degree at Aquinas College. She served as the college’s director of minority student affairs. She received an honorary Doctor of Humane Letters from Aquinas in 2001.

She volunteered with a wide range of organizations as she worked to make the community a more just and welcoming place for everyone. She worked with the NAACP, YWCA, the Family Outreach Center, the Salvation Army and the Michigan League of

Human Services, in addition to a number of state and national organizations. Sims also was a longtime member of True Light Baptist Church.

She helped establish the YWCA’s Women’s Resource Center in 1973 and she was honored with the center’s “E” Quality Award in 2002.

She broke ground as the first woman of color to be a columnist for The Grand Rapids Press.

Serving on the Salvation Army’s advisory board, Sims was instrumental in fundraising and planning for the Ray and Joan Kroc Community Center.

Her activism dated back to the 1950s, when she fought for federal funds to build Campau Commons, a public housing project. Her work led to a job with Kent County Community Action Programs, in which she advocated on behalf of the poor.