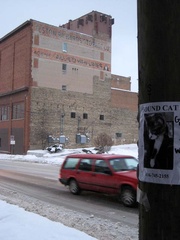 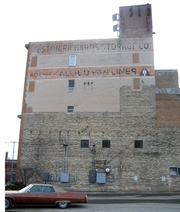 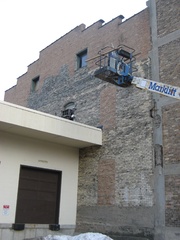 The Elston-Richard building is a five story warehouse located at 733 Wealthy Street SE at the corner of Charles street. It is currently owned by Kregel Inc.; however, it has also been the location of Elston-Richards storage and the Knights of Pythias lodge.

Based on the similar architecture of nearby buildings, it is believed that the Elston-Richard building was built between 1909 and 1912 as either a storage warehouse for cars or furniture. The inside consists of five floors with concrete pillars for support. A single crate elevator resides at the heart of the building; however, its small size suggests that the warehouse housed furniture rather then cars. Intriguing brick patterns along the external eastern wall of the building suggests at least 4 major areas of construction. During this time, the building was owned by Elston-Richards storage and used as one of their warehouses before being sold in 1973.

The Elston-Richards building was purchased by Grand Valley State University in 1973 and owned until 1982. It is currently unknown precisely what Grand Valley used the space for.

In 1982, the Elston-Richards building was purchased by Robert Kregel for Kregel Inc. For the first several years, the unit was shared with Kent Records Storage, although currently it is occupied by Kregel Inc. only.

Intriguing brick patterns along the external eastern wall of the building suggests at least 4 major areas of construction. By analyzing changes in the brick pattern, linear vertical lines in the walls, and brick color as shown in the 3rd image, I was able to separate the building into the following sections

The Knights of Pythias

During the late 1800's, The Knights of Pythais met in a lodge at the corner of Charles and Wealthy Street. The 1985 Sanborne maps reveled a rectangular shaped building owned by the knights at what currently would be the North Easter corner of the Elston-Richards building. On a private tour of the building with the President of Kregel, we were able to study the brick pattern inside the north east section. The brick formation within that room suggests that the lodge was torn down and replaced by the Elston Richard's building. This is because the southern wall inside the room was an external wall, therefore the north east corner was built after the southern half of the building as an attachment. Therefore, the Elston-Richard building would not have been erect at the time the Knights met.