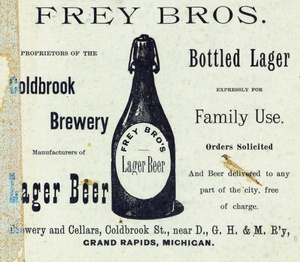 The Frey Brothers' Coldbrook Brewery was a brewery that operated in Grand Rapids, Michigan from 1872 - 1893.

The three Frey brothers, Charles, Christian, and Frederick, established the Coldbrook Brewery in Grand Rapids, Michigan in 1872.[1]  The Brewery was located on Coldbrook Street, just north of town, and likely drew water for its beer from the nearby stream of the same name.  Like most of the breweries in Grand Rapids at the time, the Coldbrook primarily brewed a type of lager beer especially favored by the city's growing German-American population.

The Coldbrook Brewery operated independently until 1893, when it became one of the six breweries which consolidated to form the Grand Rapids Brewing Company.