The oldest remaining public cemetery in Grand Rapids, Fulton Street Cemetery. The first six acres of land was purchased on July 9, 1838 by the Trustees of the Village of Grand Rapids for $300. Today, the cemetery is comprised of 12.48 acres of land. The oldest gravestone in Grand Rapids is located in this cemetery, marking the grave of Andrew Haldane. The headstone reads, "In memory of Andrew Haldane who dies September 6, 1838 in the twenty-fifth year of his age." He was brother of William "Deacon" Haldane, known as the father of the furniture industry. 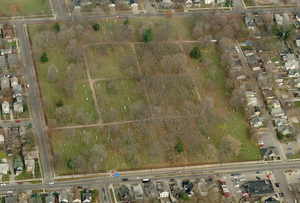 Fulton Street Cemetery is also the resting place of John Ball. A large granite boulder dug from the hills of the park that bears his name has marked his grave since 1884. Many Civil War soldiers are buried at the Fulton Street Cemetery and their memory stones give details of their service as well as names and dates.