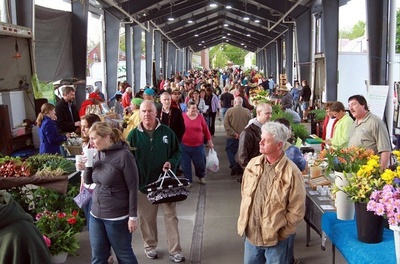 View looking south of the market in its first year since the roof was built, in 2012. Permanent counter space was added later.The Fulton Street Farmer's Market is located at 1147 East Fulton on the eastern edge of the Brikyaat neighborhood of Midtown. The City of Grand Rapids owns the market, the Midtown Neighborhood Association manages the market, and daily operations are overseen by a Market Manager. As of 2013 the current manager is Melissa Harrington.

Open the first Saturday of May through the last Saturday before Christmas on Tuesdays, Wednesdays, Fridays and Saturdays from 8:00a to 3:00p.

The Fulton Street Farmers Market is the oldest and largest in Grand Rapids. When it was established in 1922 there were three other markets in operation: a large wholesale market located on Market Street by the river and railroad tracks, a smaller market on Cottage Grove Avenue on the Southeast side of town, and one on the West side of town by the river on Leonard Street.

Originally known as the “East Side Market,” the site where the Fulton Street Farmers Market currently sits was set aside by the city to ease traffic congestion caused by farmers selling produce block by block from their vehicles or wagons. In 1926, an office structure was built, where it remains to this day. The building enjoyed a brief stint as a diner from 1953 to 1955.

Throughout its history, the Market has weathered ups and downs in popularity, vendor participation and support. Many of our vendors have been with us for generations. Dating back to 1931, Tanis Orchards has had the longest tenure. 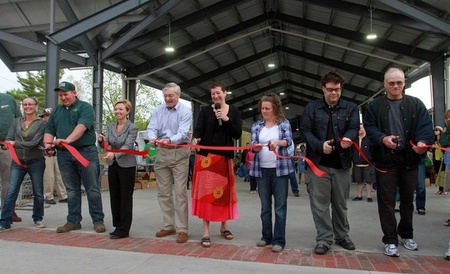 Mayor George Heartwell and others cut the ribbon to open the Fulton Street Farmers Market Saturday morning for the season opening of the new facility.