Reverend George Heartwell is the current mayor of Grand Rapids. 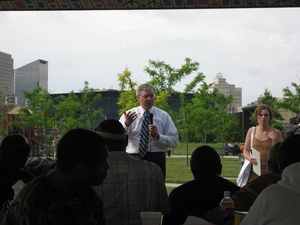 Heartwell was elected after long-serving mayor John H. Logie declined to run for re-election in 2003. Logie felt the position should be made full-time, but to avoid the question becoming a referendum on whether he should hold the job full-time, he announced that he would not run for re-election. The voters decided to keep the position part-time, and Heartwell was elected over Richa, his only opponent. Heartwell assumed office on January 1, 2004.

Prior to being mayor, Heartwell was a City Commissioner for the third ward, 1992-1999. Heartwell currently serves as President and CEO of Pilgrim Manor Retirement Community. He was Director of the Community Leadership Institute at Aquinas College, where he was a professor in the Community Leadership undergraduate study program. Mayor Heartwell is an ordained minister, for the United Church of Christ, and served for 14 years at Heartside Ministry, a program for the homeless in Grand Rapids. He was previously the president of Heartwell Mortgage Corporation.