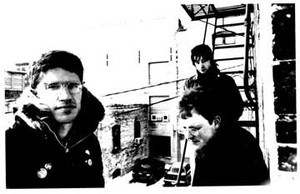 Halos For Martyrs was a much-loved emo / post-hardcore band from Grand Rapids that existed from 2000 - 2003. The group was heavily influenced by bands like Braid and Lovesick. Their last performance coincided with the last show at 10 weston, which was shut down by the police mid-set. The show was relocated to the soon-to-be-open DAAC.

Members of Halos for Martyrs have played in several other local bands, including Ghost Heart, Ribbons of Song, The Tiger Passion, Country, The Green Ribbon, Radiator Hospital, Playing with Power, and Bunkbed Nights.