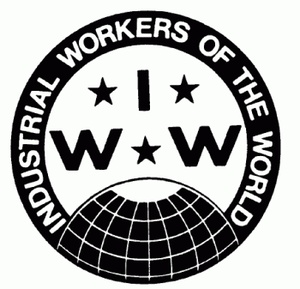 The Industrial Workers of the World (IWW) [1] is a revolutionary labor union founded in 1905 by immigrants. The union advocates solidarity unionism [2] and the one big union [3] as the way to secure gains on the job today while building a "new society within the shell of the old."

The current iteration of the IWW began organizing in 1999. In 2005, the Grand Rapids branch began an organizing drive of Starbucks. On the third anniversary of the founding of the Starbucks Workers Union [4] baristas at the Gaslight Village Starbucks announced their membership in the union [5]. Along with union membership, baristas announced they were filing Unfair Labor Practice charges with the National Labor Relations Board [6]. Starbucks eventually settled those charges [7] with the NLRB and vowed to end their anti-union intimidation. Instead of dissipating, Starbucks' anti-union discrimination increased. On MayDay 2008, baristas held a press conference [8] in front of the Starbucks in East Grand Rapids announcing the filing of the new Unfair Labor Practice charges.

Other contemporary organizing campaigns have taken place at Star Tickets and Jimmy Johns.

In 1906 following a visit by national IWW organizers, there was a short-lived chapter founded in Grand Rapids. In 1910, IWW Furniture Workers Local 202 was founded. Despite its name, most of the workers were not employed in the furniture factories. Nevertheless, the IWW was involved in the famous Furniture Strike of 1911. The union also undertook an unsuccessful effort in 1912 to organize garbage workers. During the period from 1910 to 1914, the IWW held a variety of lectures, meetings, and informational campaigns to publicize the union and its beliefs. Many of these efforts were chronicled in national IWW newspapers including Industrial Worker and Solidarity (Source: Mob Work: Anarchists in Grand Rapids, Vol. 2).