LSDudes are an electronic group from Grand Rapids. Their music draws inspiration from various counter-culture elements from the 1960s through the 1990s. Samples are used from drug-movies, riffs are borrowed from classic video games and put together with danceable electronic drum beats. Often there is psychedelic video projection that accompanies the songs. Originally they performed on stage with actual classic hardware such as an Atari 2600, Amiga 500 and Commodore 64 but eventually those were phased out as they hardly ever worked right during a show.

The band first surfaced on the 1998 Grand Rapids music compilation What's In The Bottle? The original members were Jef Leppard and Nate Murphy. Later, Nate was replaced by Rich Vogel and Chris Eddy joined on guitar.

Rather than use a real band photo, they represented themselves with a clipping of three "groovy-looking" guys found in a 1960s magazine. This image was used as their icon during most of their existence.
LSDudes kept getting offered shows and kept playing through the years, though only formed as a one-off joke band. They supposedly played their final show in August 2007

The band will finally release their self-titled album on Friction_Records in September 2008 and will reunite to play a series of release shows. 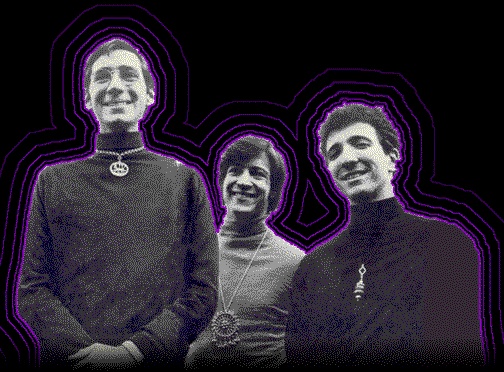