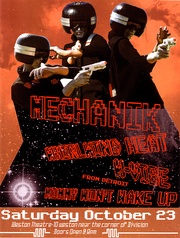 Flyer for a show at 10 Weston

Born Ayei Ghil, Mechanik is the stage name of this wandering alien who crash landed on earth in 1998 and, at the behest of his dying robot buddy, started performing pop music around the city of Grand Rapids in an effort to raise enough money to get the necessary parts for repairing his ship. Along the way Mechanik released several 7"s and a full length CD This Damn Planet on Scratch N Sniff Entertainment in Kalamazoo.