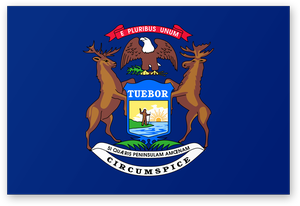 Flag of MichiganMichigan is the 26th state in the United States of America, having recieved her statehood on January 26, 1837. Michigan is comprised of two peninsulas (the Lower Peninsula and the Upper Peninsula), and surrounded by four of the five Great Lakes: Lake Erie, Lake Huron, Lake Michigan, and Lake Superior. Michigan's capital is Lansing, which is also its third largest city after Detroit and Grand Rapids. Michigan is the 8th most populous state in the union, and 11th overall in land mass.

The Lower Peninsula of Michigan is shaped like a mitten with the thumb on the East. This distinctive shape makes Michigan easy to identify on maps, globes, and satellite images. This shape also leads to Colloquial Ad Hoc Mapping and Map-Related Anger.