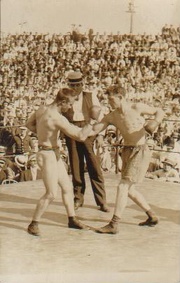 Stanisław Kiecal, (September 14, 1886–October 15, 1910), better known in the boxing world as Stanley Ketchel was an American boxer of the Polish origin who became one of the greatest world middleweight champions. Some sources list his year of birth as 1887, but 1886 is generally accepted as the year Ketchel was born. He was born in Grand Rapids. He was nicknamed the Michigan Assassin.

Only a middleweight, Ketchel was also known for taking on Heavyweights who sometimes outweighed him by more than 30 pounds (14 kg). Ketchel used a very unusual method in his fights. He had a very close and loving relationship with his mother. Before each of his fights, he would imagine that his opponent had insulted his mother; thus, he would be fighting with almost insane fury.

He started boxing professionally in 1904 in Butte, Montana. In his first fight, Ketchel knocked out Kid Tracy in one round. In his second fight, he tasted defeat for the first time, beaten by decision in six by Maurice Thompson. He boxed his first 41 bouts in Montana, and had a record of 36 wins, two losses and three draws during that span. He lost once more and drew with Thompson, but beat Tom Kingsley, among others, before moving his campaign on to California in 1907.

There, he won three fights that year, and drew one in Marysville, California against the man many considered the world's Middleweight champion, Joe Thomas. In his next bout, he and Thomas had a rematch, and Ketchel won, by knockout in 32 rounds. Ketchel was then recognized by many as the world's Middleweight champion. He finished the year by beating Thomas again, this time by decision.

On February 8, 1908, Ketchel met the man who was generally recognized as the world's Welterweight champion, "Mike Twin Sullivan", knocking him out in the first round and winning general recognition as world Middleweight champion. Whether he became world champion against Thomas or against Mike Sullivan has always been up to debate, but the fact remains that it is Mike Sullivan and not Thomas who is historically remembered as a world champion.

Ketchel began 1909 by fighting reigning light heavyweight champion "Philadelphia Jack O' Brien" with a no-decision in 10. A few weeks later, Ketchel had a rematch with O' Brien, knocking out Philadelphia Jack in three rounds. He beat Papke in their fourth bout by a decision in 20 rounds to retain the title, and then challenged Jack Johnson for the world's Heavyweight crown.

Ketchel's battle with Johnson has been called by many a modern day "David and Goliath".

In the 12th round Ketchel floored Johnson with a right hand. Johnson got up and knocked out Ketchel with a right uppercut.

Ketchel showed no fear against his larger and stronger foe. He was knocked down several times in the fight and was punished yet kept coming back. Johnson said to his seconds between rounds "That man isn't human". In round twelve of that fight, Ketchel reached Johnson with a right to the chin that sent Johnson to the canvas. The punch shocked Johnson on two levels. One it came from a much smaller Ketchel. Two, it was rumored that Ketchel and Johnson when they agreed to the fight, they both agreed to take the fight the full 20 rounds and Ketchel would allow Johnson to win in the 20th. The reason for this was each man was interested in making as much money off the fight as possible. A 20 round fight would guarantee boxing fans would pay to go to local theatres to watch the replay of the fight. When Ketchel deviated from the alleged plan in the 12th, he then faced the alleged wrath of Jack Johnson.

Upon regaining his feet, Jack Johnson knocked out Ketchel with a blow full in the mouth. Ketchel did not wake up for many minutes and some of his teeth were knocked out by the blow, some imbedded in Johnson's glove.

His final year, Ketchel had a series of fights at the Heavyweight division, including one against Sam Langford. Ketchel went to a farm near Conway, Missouri to train for his next fight, but a jealous farmhand named Walter A. Dipley caught his girlfriend, Goldie Smith, and Ketchel chatting on the evening of October 14. While Ketchel was having lunch on October 15, Dipley, suspecting Ketchel of trying to romance Ms. Smith, walked up and shot him to death. Dipley was arrested for the murder.

Ketchel was buried at Holy Cross Cemetery. His funeral was reportedly one of the most well-attended events in Grand Rapids history.

Ketchel's funeral was the subject of an article of issue 3 of the Buried Life (link).

Ketchel is now enshrined in the International Boxing Hall Of Fame.

Ketchel was named in 2004, by Ring Magazine, number six among boxing's all time best punchers.

He had a record of 52 wins, four losses, four draws and four no decisions, with 49 wins by knockout.

Subject of a novel called "The Killings of Stanley Ketchel" by James Carlos Blake.