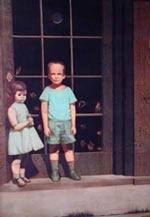 The Hands Resist Him

The Hands Resist Him, also known as the eBay Haunted Painting, is a painting created by Oakland, California artist Bill Stoneham in 1972. It depicts a young boy and female doll standing in front of a glass paneled door against which many hands are pressed. According to the artist, the boy is based on a photograph of himself aged 5, the doorway is a representation of the dividing line between the waking world and the world of dreams and possibilities, and the doll is a guide who will escort the boy through it. The hands themselves represent alternate lives or possibilities. [1][1] It became the subject of an urban legend and a viral internet meme in February 2000, when it was posted for sale on eBay along with an elaborate backstory implying that it was haunted. [1][1][1]

It is currently housed at Perceptions Gallery on Ionia St.

The painting was first displayed in an LA gallery during the early 1970s, at which point it was reviewed by the art critic at the LA Times. It was then purchased by actor John Marley, [1]notable for his role as Jack Woltz in The Godfather. [1]

At some point in time after Marley's death, the painting was said to have come into the possession of a California couple, after being found on the site of an old brewery. [1][1]

The painting appeared on eBay in February of 2000. According to the seller, the aforementioned couple, the painting carried some form of curse. Their eBay description claimed that the characters in the painting moved during the night, and that they would sometimes leave the painting and enter the room in which it was being displayed. Included with the listing were a series of photographs that were said to be evidence of an incident in which the female doll character threatened the male character with a gun that she was holding, causing him to attempt to leave the painting[1][1]. A disclaimer was included with the listing absolving the seller from all liability if the painting was purchased. [1][1]

News of the listing was quickly spread by internet users who forwarded the link to their friends or wrote their own pages about it. [1] Some people claimed that simply viewing the photos of the painting made them feel ill or have unpleasant experiences. Eventually, the auction page was viewed over 30,000 times. [1][1]

After an initial bid of $199, the painting eventually received 30 bids and sold for $1,025.00. The buyer, Perceptions Gallery in Grand Rapids, Michigan eventually contacted Bill Stoneham, and related the unusual story of its auction on eBay and their acquisition of it. He reported being quite surprised by all the stories and strange interpretations of the images in the painting. [1][1][1] According to the artist, the object presumed by the eBay sellers to be a gun is actually nothing more than a dry cell battery and a tangle of wires [1].

Stoneham recalls that both the owner of the gallery in which the painting was first displayed, and the art critic who reviewed it, are said to have died within one year of coming into contact with the painting. [1]

New paintings in the series

One person who saw the story about the original painting contacted Stoneham about commissioning a sequel to the painting. Stoneham accepted and painted a sequel called [1] Resistance at the Threshold. The sequel depicts the same characters 40+ years later in the same style as the original. Stoneham has entered into an agreement with the current owners of the painting to sell prints of it in three sizes. Those prints as well as prints of the sequel painting are available on his website.

The painting is featured in a popular cultural media: