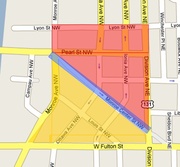 Urban Capture the Flag is a seasonal game played throughout the summer in the Center City portion of Heartside-Downtown since 2006. Monroe Center traditionally serves as the dividing line and "no man's land," but geographical variations of the game have been played. Games are usually held at 8pm Sundays, starting from behind Flanagan's Pub.

In March of 2006 a group of Calvin College students, organized by the editors of Buried Life, played a now infamous game of capture the flag in the Oakhill Cemetery. A number of the participants were threatened to "run or get arrested," by a group of local policemen. This was the one and only outing of the Calvin College chapter of Urban Capture the Flag.

The most current iteration of Urban Capture the Flag in Grand Rapids came to fruition after the idea was discussed among employees of the Bull's Head Tavern. Johnny K, a Bull's Head employee and member of the Van Buren Boys organized the first game of the current iteration, played on Sunday, August 6, 2006. It should be noted that a previous attempt at establishing urban capture the flag in Grand Rapids was made by Ben Schaafsma, though the execution of the actual event became the responsibility of Jenn Schaub.

Within one month of the August 6, 2006 games, copy-cat leagues had formed primarily comprised of members of Hope College.

By the October of 2006, police intervention became an increasing concern among the players, despite no specific infractions or charges having been known to have been committed. The final game of the 2006 season was played on October 29th, 2006.

Traditionally, the opposing teams have been dubbed "Red" and "Yellow" (named after the corresponding flag colors/arm bands). Teams are determined by a player deciding for him or herself what team he or she would prefer to be on. This generally leads to teams being composed of the same people each week.

The 2007 GR Urban Capture the Flag Season began on May 27th, 2007. As of July 8, Red holds the winning record between the two teams with nine wins, seven losses and six draws, thus reversing the ranking between the two teams for the first time since the opening of the season (prior to this, Yellow had held the superior record).